The Hollywood film based on Kevin Kwan’s best-selling rom-com novel depicted the dramatic lives of wealthy Asian families through scenes shot on the tiny island of Singapore.

Following the many charms of this modern island-city that were brought alive onto the big screen, here’s a compilation of the best photo spots for a Crazy Rich Asians themed wedding photoshoot.

1. Gardens by the Bay

The Supertree Grove at Gardens by the Bay was where Colin and Araminta had their wedding reception party in the movie. The supertrees indeed look as mesmerising in real life as in the movie, when they light up in an array of colours at night and come to live during the light and sound shows.

This is one of the hotspots for a night shoot since the grove has often been described to resemble a scene from Avatar. The futuristic-looking light displays of this glow-in-the-dark garden never fail to add a touch of fantasy to the photos. 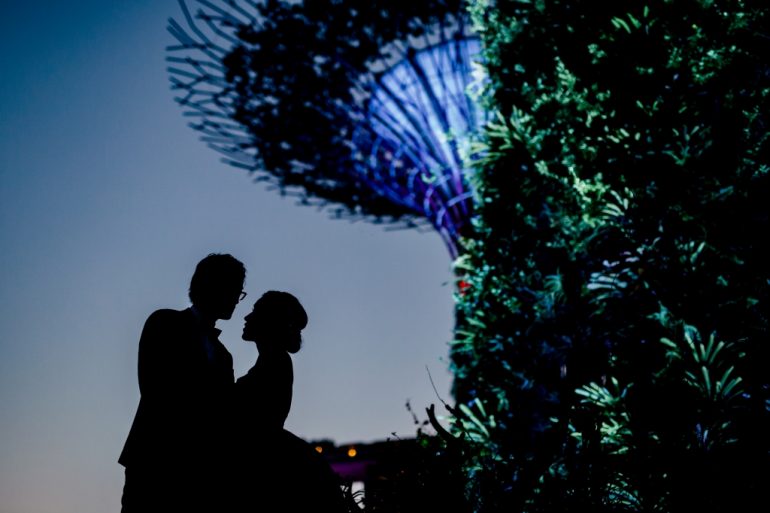 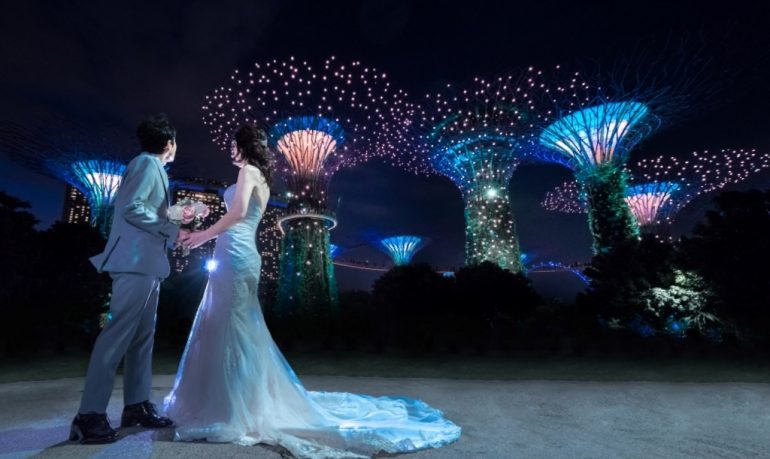 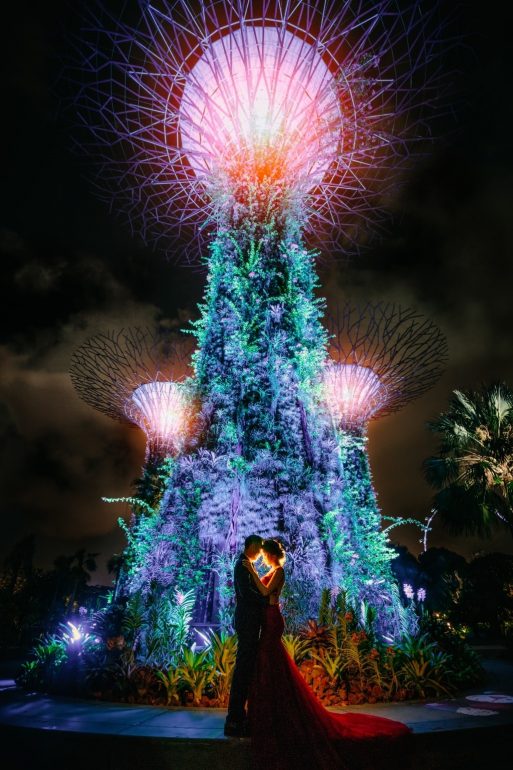 You probably won’t get lucky enough to have these fireworks in your photos, but the cityscape of the Marina Bay Sands area is for sure still a charming sight at night even without these colourful explosions in the sky.

Dress up in your glamourous evening outfits and be the star of this dazzling city night scene with the iconic towers of Marina Bay Sands, glowing white lotus structure of the Art Science Museum, and the swirling Helix Bridge straight out of a sci-fi movie as your background. 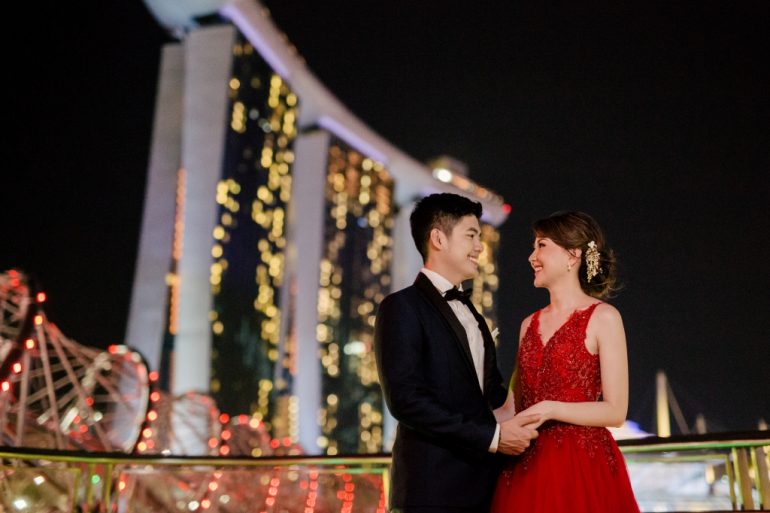 Although they are not fireworks, the grand display of the light and water show at the Marina waterfront is a real sight in photos. 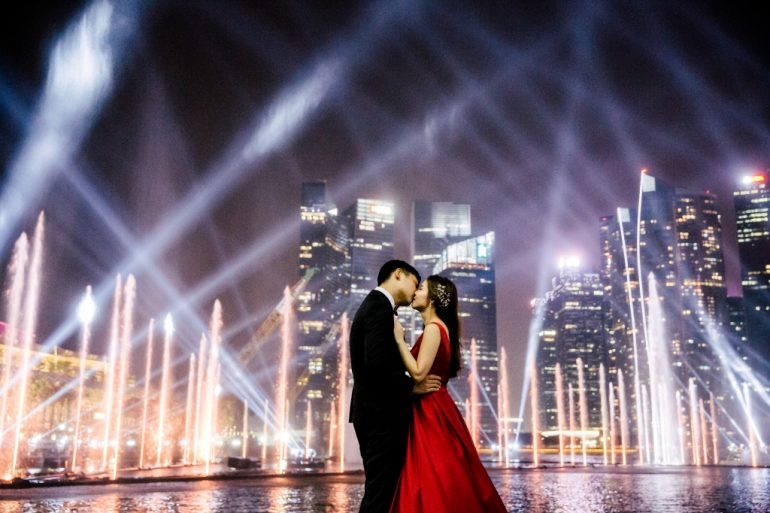 You can also walk into the future through the Helix Bridge, with its giant metallic DNA structure. 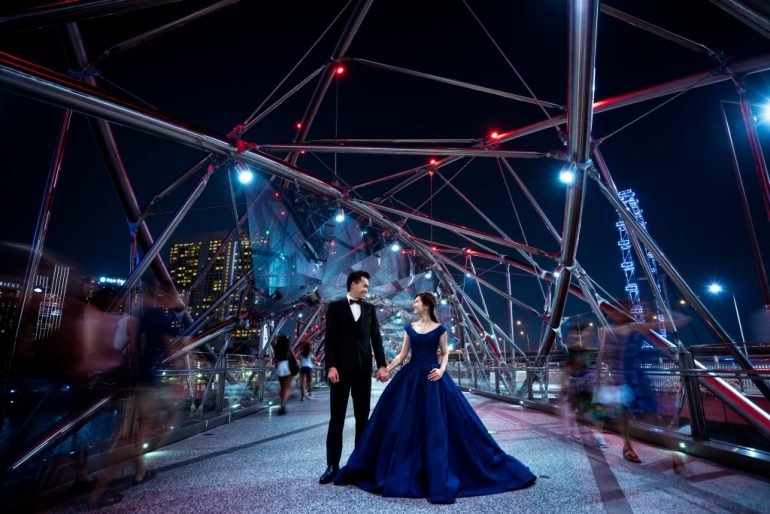 This historic building along Victoria Street was where Colin and Araminta held their dreamy botanical wedding ceremony. One of the most sought after solemnisation venues in Singapore, the stained glass windows and intricately-designed mosaic floor tiles of this gothic chapel makes it a charming spot for wedding photos.

The movie was filmed in various locations which featured old shophouses that preserve the heritage of Singapore. For instance, this scene where Rachel and Peik Lin were having a deep conversation offers a look at the row of Peranakan houses on Bukit Pasoh Road.

There are in fact many other places in Singapore with streets that are flanked by these colourful traditional shophouses that can be the perfect backdrop if you want a change from the modern city scene.

The Potato Head Building is an iconic white and red building and Instagram hotspot located on Keong Saik Road which houses a quirky cafe and rooftop bar.

SEE ALSO: 10 Instagram-worthy Cafes in Singapore that are Even Better than Shooting Outdoors

These beautiful Peranakan houses with their intricate architectural details will serve as a vibrant backdrop, especially for a fun casual shoot.

A house can’t get more colourful than this! Located at Little India, this Chinese villa is another photo-worthy spot.

Decorated by overhanging chinese lanterns, the streets of Chinatown are immediately recognisable as one of Singapore’s important cultural spots.

This conservation area located near Orchard Road preserves many of the former houses of the wealthy Peranakan community. The uniquely furnished front porches of these Chinese Baroque-style houses cannot be missed.

A post shared by Raffles Hotel Singapore (@raffleshotelsingapore) on Dec 17, 2018 at 2:04am PST

This colonial-style luxury hotel was where Nick and Rachel stayed in the movie. Its white interiors and exteriors are equally exquisite for a session in a grand wedding day outfit. The hotel will be reopening its doors in August 2019 after undergoing some restoration works.

Singapore is an ideal pre-wedding photoshoot destination for a mix of sights between lush tropical greenery and modern cityscapes.

OneThreeOneFour has done many pre-wedding shoots for overseas and local couples alike in this charming little city. Find out how to have your own Singapore pre-wedding photoshoot done!

Choosing the Right Gown and Suit for your Wedding Photos 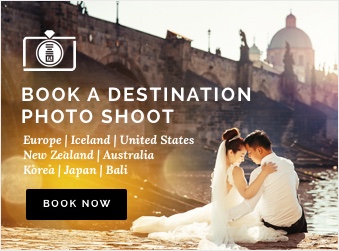